Aren't We In A Severe Drought?

According to the Saturday night news, we are in a severe drought in Indianapolis with about 0.08 inches of rain in the past 45 days. The water company started the first ever Indianapolis mandatory watering ban. Why are we writing about this in our Horner House blog? Because we are not very sure that Citizens Water understands that we are currently in a drought.

On Tuesday afternoon, Ron went to the Bungalow to mow the few tall weeds and noticed some really lush green grass in the grass strip between the sidewalk in front of the Horner House & Emerson Avenue. A four foot square area was muddy and water eventually spilled out into the street flowing down the gutter to the corner. Now, even if we weren't in the middle of "an Historic" drought (per WTHR), we would be worried about what was obviously a water leak. 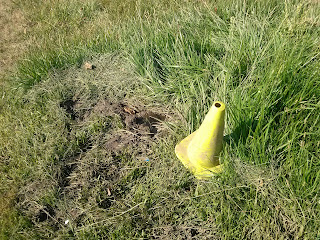 Real green grass in the strip between the sidewalk & street.
So, Ron called Amanda and she called the water company. They answered the call very quickly and were very helpful saying that they would get a truck out the same day to take a look at it. The conversation went very well until Amanda asked about whose responsibility this is. They told her anything on the property side of the water meter is our responsibility and the rest it theirs. Now this would not normally be a problem, but we have no idea where the water meter to the Horner House is. So Amanda asked several more questions was told that anything is possible and yes there could be water running to the Horner House, but that they couldn’t tell us anything until someone came to look at it. She could call back after 4pm and they would know more then. Since she only called it in at 2:45 that seemed like a reasonable response.
But it left her worried. The only plumbing in the house was in the West Wing. Since there are broken floors and walls, we are certain that there are broken pipes. What if water is collecting in the cellar as well as the street? Anything that impacts the cellar has the potential to literally bring the house down. And how is it possible that there could be water coming from our side of the meter? We never had it turned on.
So, Amanda planned to make the call as soon as she returned to Indianapolis from Valparaiso. Unfortunately, as you may have seen from the Facebook page, the car had some issues on the way home and it distracted her. It was a bit after their 7pm closing time when she remembered that she needed to called back.
On Wednesday morning (the 11th), as soon as she could break away from the immediate needs of the company, Amanda called to find out what the status of the leak was. She was told that someone had been by and noted that it looked like a water meter leak and ordered another truck out to look at it. Now, things were starting to look worse. If this is a meter leak, why is it leaking and could there be water running to the house. When Amanda explained the issue and the concern, she still received the same “party line” that they didn’t know anything and wouldn’t know until it was looked at. And call back after 4pm and before 7pm.

Knowing that the cellar could be full of water and the foundation of the entire structure in danger, we began trying to figure out how we could check for water ourselves. Our contractor & engineer had left us with strict instructions NOT to disturb anything around the cellar. Indiana Landmarks was called and notified of the issue and asked some questions about any other information that they might have in their records. Other calls were made and a last resort of crawling through the crawl space back to the cellar to try and see or hear any water was considered. This being the most dangerous choice, it was decided that we would wait until after 4:00pm and see if we need to do it then.

At 4:05pm Amanda and Ron called again. After speaking to a customer service rep., being put on hold for his manager, being hung up on (they did eventually try and call back and leave a message), calling back, speaking to another customer service rep. and transferred to her supervisor (think 65 minutes later), they thought they had finally found someone who could help. They educated the supervisor on the importance of understanding where this was leaking & why. (Perhaps it was something about Ron stating that. since we had notified them of the issue, that if this historical building was damaged then they would be responsible and dealing with several news stations and our lawyers.) The supervisor finally agreed to send someone out to find the water meter and make sure that the water to the Horner House was turned off. They were to come out the next day, Thursday, but they wouldn't tell us when they would be there. Their policy is for the workers to hit & run - they don't let anyone know when they are to turn off your water and they do not knock or let you know they are there. It makes their workers "uncomfortable" when they have to turn off someone's water. Even after arguing that we were the ones asking to have it turned off, they refused to let us know when they would be there. The only detail we got was they would be there between 7am & 4pm the next day.

After Amanda and Ron got off the phone they looked some more to see if there was a way to check things out without going into the crawl space or the cellar. Ron was finally able to contort himself enough to shine a light into a crack (without touching anything). He was able to see a small part of the cellar floor and it was dry. This brought some level of relief; however, the water still needed to be checked since we couldn't see the entire cellar.

On Thursday Ron & Tristan staked out the front of the Horner House so they could speak with the water company when they showed up. The water company was a no show. A note was left on the door on Friday at 3pm, however, as far as we can tell, they didn't do anything. So when we’re in the middle of a severe drought, when people are severely restricted on what they use water for, is the water company not concerned with a leak? The water continues to flow into the street at about a gallon a minute by our estimate. Amanda is going to try to determine whether they can capture or divert some of it to the trees on the property that have taken a big hit with the drought. There are several large trees that might be lost without some water - lost right into the middle of Brookville Road.

Oh, per the Supervisor at Citizens Water, it could take up to four weeks for the leak truck to come out and fix the problem. 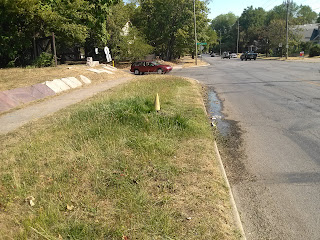 Notice how brown the yard is and the amount of water in the gutter.